WCCTV's Mobile Surveillance Systems Back in the News

WCCTV's mobile video surveillance have been back in the news across the US, highlighting their effectiveness in supporting government departments and law enforcement agencies looking to tackle a range of criminal activities.

WCCTV's Pole Cameras have been featured in local news stories in the City of Brownsville, where government officials recently invested in the systems to helps tackle illegal dumping.

Figures released by the city in 2017 indicated that there were 600 incidents of illegal dumping, with an estimated cost of  $100 every single day in clean-up operations passed directly on to taxpaying citizens.

The City took direct action against the damage done by illegal dumping by investing in mobile surveillance systems, specifically WCCTVs 4G HD Mini Domes, in conjunction with raising community awareness of the environmental and health implications caused by illegal dumping.

“The new cameras, I’m being told, are a lot more effective. They’re high-tech cameras, and they capture better video and audio,”.

“They are true surveillance cameras, and it allows us to work more efficiently throughout the city and to work with law enforcement.”

"We’ve seen that once you have a true high-tech surveillance system, it really makes people think twice."

You can find more on this story at:

Also in the news for their investment in WCCTV's mobile video surveillance systems are Niagara Falls Police Department.

Having noticed crime increasing in the Pine Avenue area, the city and Niagara County officials decided to make things more difficult for the criminals by investing in WCCTV's 4G HD Mini Dome's.

Crime has generally decreased in the Falls in the past four years, but some "hot spots" have emerged. WCCTV's rapid deployment pole cameras allow departments to target these hot spot areas, and then move the cameras to new locations should requirements change.

Mayor Paul Dyster said of the investment in WCCTV's cameras:

"Perpetrators don't necessarily know where those cameras are located."

"They don't know what their reach is. They may think twice if they think an image of their face or of a license plate on their vehicle is likely to turn up in evidence against them."

"The protection that we have now is more than we've ever had, so we feel pretty secure on Pine Avenue, and the cameras are going to be a great help," said Sylvia Virtuoso of the Pine Avenue Redevelopment Project.

Dyster acknowledged that cameras won't stop every crime or lead to the arrest of every criminal. But he said technology along with observant citizens, "allow us to have a very, very good track record."

Read more on this story at: 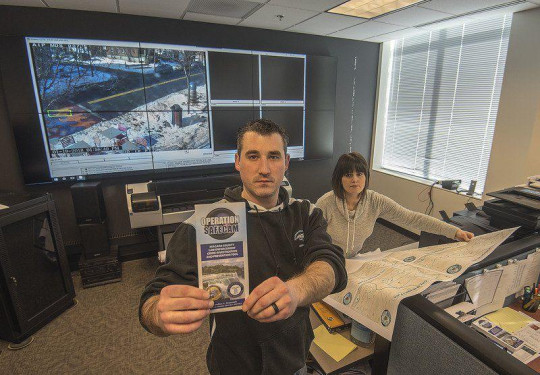 Back to news
Get in touch